Meteorology and kitesurfing in Vietnam

When visiting our country, Vietnam, if your intention is to practice or to learn kitesurfing, you should read our blog entry about meteorology and kitesurfing in Vietnam  and how both are related.

In the this report we will try to give a brief idea of how Southern Vietnam
gets affected by the summer and winter Monsoon winds and how this in turn will affect meteorology and therefore, the wind and your kitesurfing chances in Vietnam.

Considering, though, in a lesser mesure, that atmospheric air circulation can be directly associated with thermal contrast in land–sea heating, especially in the coastal areas, and this, can enhance in occasions the wind force. 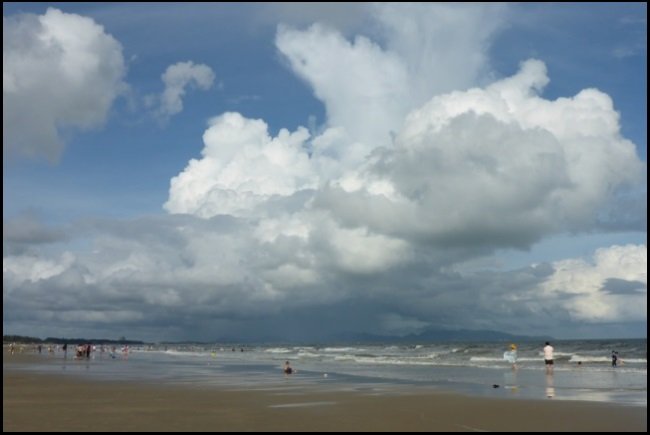 October in Vung Tau beach – a rain shower is arriving

The south of Vietnam is hot and humid throughout the year but the wet season is from May to October, while the dry season goes from November until the end of March.

THE MONSOONS AND ITS INFLUENCE

During winters, cold high pressure zones over Tibet clash with low pressures forming over Australia, causing the air mass circulation that gives place to the winter monsoon winds, heading direction NE towards SW and reaching Southern Vietnam on its path.

The dry season goes from November to the beginning of April.  During this period, winds blow from the northeast direction along the China coast  but at the same time pick up moisture from the sea.

That’s why even it’s called “dry season” it’s dry only by comparison with the summer season, therefore, in the moment in which winds doesn’t blow, the feeling of humidity can become clearly evident. 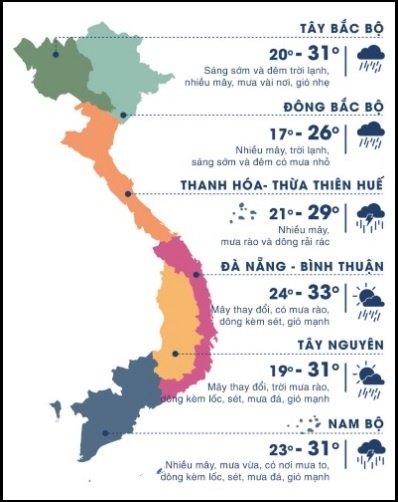 During the Southwest monsoon, which occurs from May to October, the meteorology and kitesurfing in Vietnam should get affected when the heated air of the Gobi Desert rises, far up towards the north, inducing humid air to flow inland from the sea which in turn, will give place to heavy rainfalls.

During summer, air masses from the Indian Ocean flowing over Vietnam, will release all the moisture which they have picked up from the ocean on their way. Rains then, tend to fall, generally more frequently as afternoon downpours.

The month of October marks usually the end of the rainy season and the beginning of the dry season, not excluding after a week of good wind, some days of south or southwest winds which will bring some occasional rain again

Between November and mid-February, temperatures get around 30 Celsius,  but by from mid-February they may start to rise to 35 and even 40 Celsius

Vietnam is located in the path of typhoons , the tropical cyclones of the western Pacific, which may seldom affect the south  of the country –Vung Tau city-only with a small margin of possibility from mid October to mid December, being during this period its higher possibility mostly during the first two weeks of November.

In January, and again from March to mid of May, occasionally, some tropical depressions can form, generally off central and southern Vietnam , which however almost never manage to reach the coast, but lose their effect over the ocean, though  can be the cause of waves reaching the southern shores.

In fact, from November to end of March weather in South Vietnam is dry and sunny.   If you decide to visit Vietnam in July and August, you should choose the south-central coast from Da Nang until Nha Trang, as during this period it is not too hot neither too humid and a small chance of typhoons.

Weather in Southeast Vietnam is characteristic of the sub-equatorial climate. The average temperature in this region during summer can be higher than in other regions.

Southern Vietnam it is formed by low plateau surface and some hills. That’s why climate in this part of the country has typical characteristics of sub-equatorial climate, no high mountains which may affect the wind on its path.

However, natural disasters such as hurricanes very seldom occur in the Southern Vietnam area, being the chances in central and north of the country much higher. Let’s see now about the four possible winter weather scenarios.

First type.-  of expectable weather can be mild and dry,  lasting for several days , and taking place during the months of December and January, enjoying blue skies and cool air.

Second type.- of weather takes place when the region may be influenced by high pressures over the Pacific ocean which can give way to hot dry weather. This weather can occur from mid March to early April, bringing along also  sunny skies and hot temperatures. 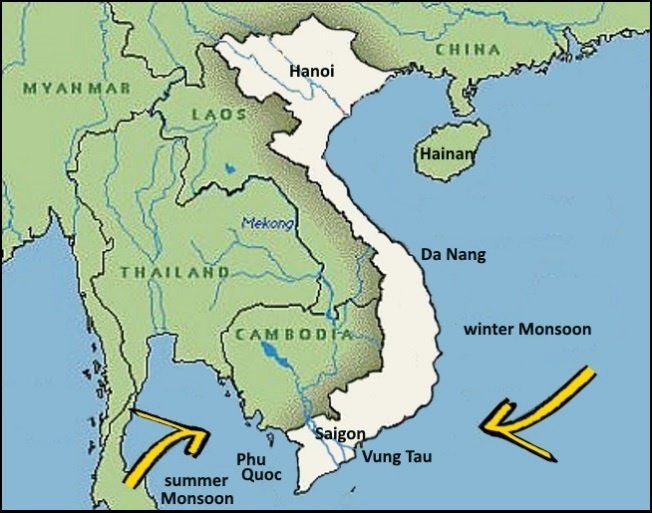 Third type.- of weather in the southeast region tends to be wet, due to typical hot west winds which arrive from north and central parts of Vietnam, or else from April/May on and during the summer months June, July August and September, in which winds will come from south and southwest direction.

When showers and thunderstorms occur, weather becomes a bit cooler but carrying also more humidity.  In April, the weather can be extremely hot, being the hottest month of the year.

Vung Tau winds during the summer days come mainly from south to southwest direction. The skies can be  more or less cloudy  but certainly some rainstorms will occur.

The rainy season in Vung Tau area, as said, goes from May to mid October. In the early months of the rainy season, showers often take place but also stop suddenly.

During the months of July, August, and September,  sometimes the area can receive heavy rains.  The temperature is around 27 Celsius, reaching the highest point, sometimes at 39 Celsius.

The city and Bai Sau beach of Vung Tau is the ideal kitesurfing destination in Vietnam, and can be visited through the  whole year but preferably during the months of October to April for it’s gentle breezes and almost no rain.

In summer, the climate of the Southeast Asia region is dominated by the South Asian monsoon. This is also known as the south‐west monsoon, hot and wet all through the south of Thailand and Cambodia and in the Southern provinces of Vietnam.

During the winter months, the chances of receiving dry winds improve greatly. being this period of the year the best for a good kitesurfing session.

In the upper troposphere, the high pressures over the northern Bay of Bengal and the westerly winds over northern Australia helps producing the southwest monsoon, which will send rain and wind towards the east. 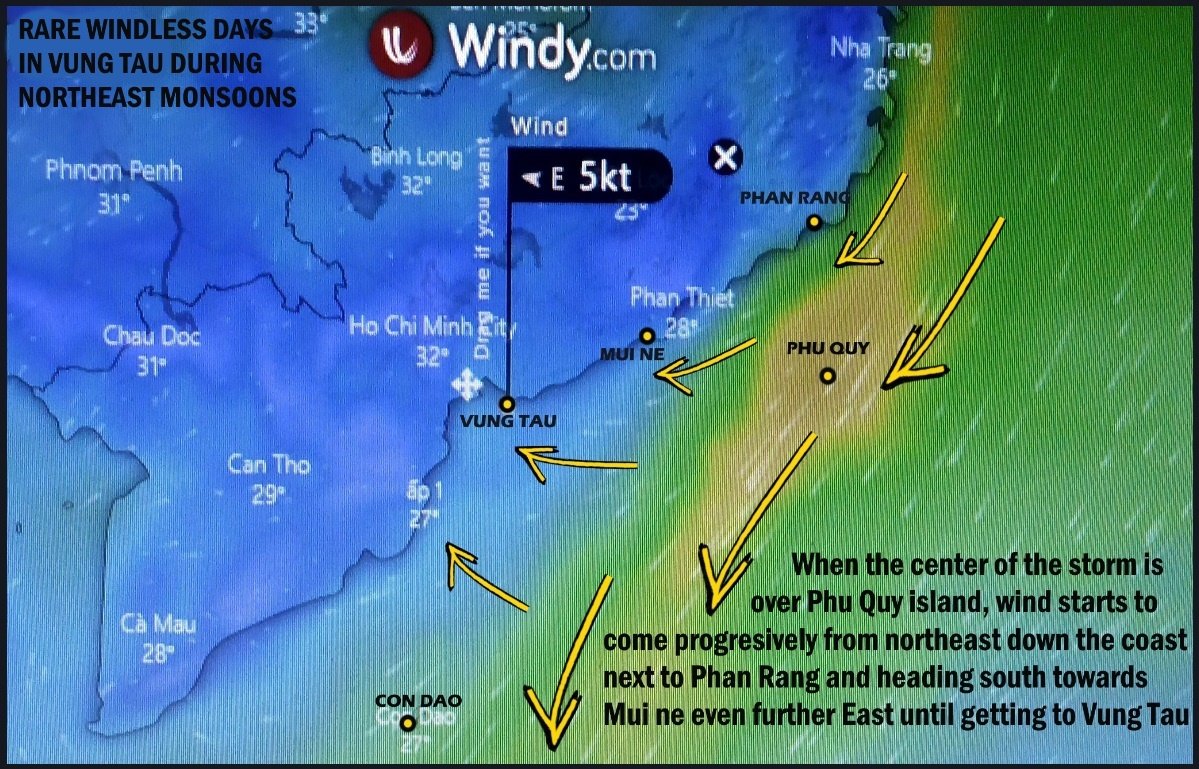 Wind and its causes

The wind consists generally on a mass of air that goes from a place of higher pressure to another place of lower pressure.

To measure the wind  speed, we, kitesurfers, use the anemometer.  The higher the difference in atmospheric pressure between two points, the stronger tends to be the wind.  Monsoon winds always tend to blow from cold to warm regions.

Wind in kitesurfing sport it’s generally measured in knots and the wind direction it is measured in degrees.   By instance, on a regular winter day in Vung Tau, we will receive wind of a force of 18 knots and from direction 80 degrees NE.

Monsoon winds, as well as Trade winds in the other side of our planet are the consequence of several other reasons besides the two reasons explained in the last paragraph. 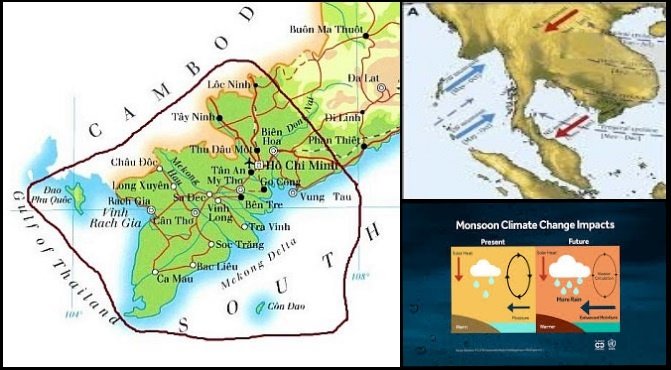 Monsoons occur in the warmer regions of the southern hemisphere as seasonal winds, caused by great temperature differences between land and  ocean.

During the winter months, wind circulation is from the cold land towards the warmer sea and in the opposite direction for the opposite reason during summer months.

Due to the Intertropical Convergence Zone this wind current periodes occurs bringing to the equation some broader considerations such as oceanic currents, sea water temperature, plancton, etc.

The consequence of the high pressure zone over Mongolia and northwestern China from November until end of March, together with other factors pushes cool, dry northeasterly winds over most of the continent which is the cause of the winter monsoon in Asia.

Monsoon winds in surface blow from heat sink to heat source. How this affects the meteorology, the wind and the kitesurfing in Vietnam is what we have been trying to explain through this lines.

To end this report, it is also convenient to take into account the effect that thermal differences, at a local level, can have, also influencing the wind, as it is the case of a mass of air over the ground.

That, when overheated, this mass of hot air tends to rise while its place will be occupied by air which was over the sea at colder temperature, which in its displacement can be the cause of an increase of the wind force