In this entry to our kiteblog we will talk about the winds in Vietnam. To understand what happens each year in the different seasons in Southeast Asia you have to understand several important things

By instance, the same weather situation that causes rain during the monsoon season in India also affects the climate of Southeast Asia, although the timing may differ a month earlier or later, based on where you are in Asia.

The southwest monsoon begins in June and ends by the mid-end of September or even until the first week of October in some countries.

Specifically, we kitesurfers,are affected by that fact, that is why knowing how to choose the area, the country, and the time to visite this chosen place will make us succeed if we want to navigate and enjoy the most of our time in the water..

It is important also to have in consideration that in some areas we will find more frequent wind or perhaps stronger wind than in other, but this, although important, could not be the decisive factor in choosing one place or another.

There are factors such as the orientation of this or thatparticular beach where we are heading, in regard to the coming wind direction, as well as it is important to consider how’s the depth on the shore of that beach or a more appropriate downward curve on the beach shape which may give rise to a much higher swell.

For example on the beach of Bai Sau, in our chosen Vietnam beach in the city of Vung Tau or  perhaps if we move up, we may find a much more chaotic water surface, such as the famous Mui ne beach, a couple of hundred kilometers further north of Vung Tau.

OTHER COUNTRIES THAN VIETNAM

The different wind pattern cause by the monsoon affects India, Bangladesh, Indonesia, Philliphines, China, Thailand Cambodia, Laos and of course, Vietnam, causing the rainy season in those countries to take place between May and  until early October.

The annual monsoon it is greatly awaited, as among other effects, replenish fresh water in lakes, rivers and aquifers, also it maintain the landscape with a desirable amount of humidity and, after all, the rains brought by the South monsoons are crucial for the cultivation of most vegetables and especially for the rice crops.

A delay in the arrival of monsoon rain can cause crops to fail. 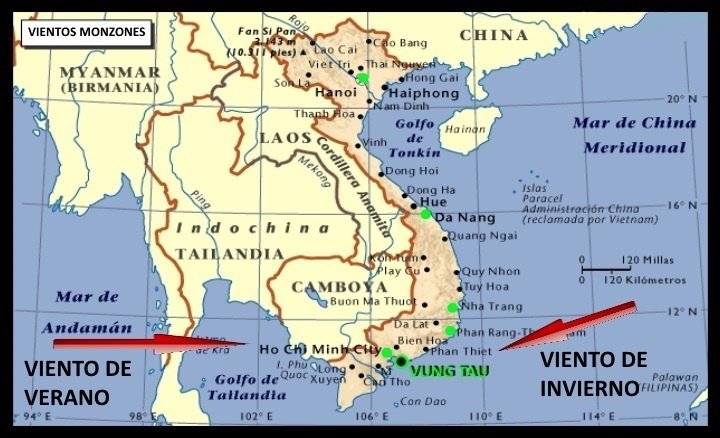 The cold air of the Himalayas is what in its movements, depending on the time of the year, causes the monsoon of the northeast, which in turn, makes the countries in the southernmost part of Southeast Asia to receive rain while South Thailand and especially South Vietnam and the neighboring part of the countries on that latitude, enjoy a drier climate.

Although monsoon winds do not always follow the exact same rules, the weather in Southeast Asia is, in fact, quite predictable.

Most of the countries of Southeast Asia have two distinct seasons: the wet and the dry but  Southeast Asia being on its most part close enough to the  Ecuador hemisphere, whether it is dry or wet weather, depending of the wind direction -is what makes the difference of season- the expectable, in any case, especially in the countries closer to the Ecuator line it’s intense heat throughout the whole year, with small differences.

The Northeast monsoon season in Thailand, Laos, Vietnam and Cambodia runs between October and end of April; despite this, the rain can end a month before or it can as well be delayed a month.

Due to the special shape of the country of Vietnam, the weather differs greatly between the north and the south -same things happens in Thailand- even in the same monsoon season, whether they are from the East or the West.

The wind in Vietnam

Temperatures in Hanoi can be quite cool until cold in winter between the months of November and March while in southern Vietnam, in Ho Chi Minh city but most preferably in the coast on the city of Vung Tau, for example, temperatures are much more pleasant, the atmosphere being less humid than in the previous months.

Vung Tau also has a beach of great dimensions and shallowness, so, that results in a tidier swell offering kitesurfing conditions better than in other areas of the country 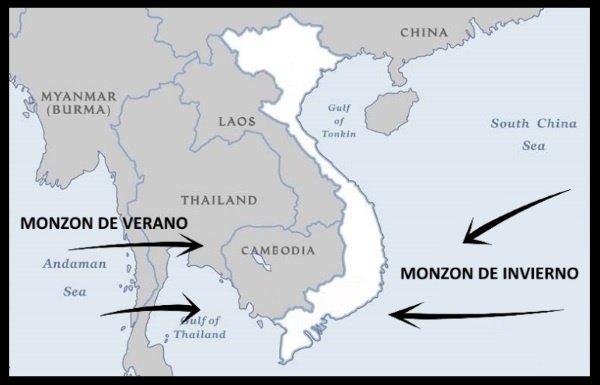 While in the cities of Da Nang and Nah Trang, both in the central part of the country, during the winter months, can be affected frequently by the typhoons coming direction East West which are passing over Philiphines.

In any case, this central part of Vietnam also receives the East monsoon winds, which  generally are not of the intensity or frequency than the winds  in the southern part of the country.

In kitesurfing destinations of Phan Rang or Mui ne, the wind is more intense than in any other area of the country but if we add to this, other issues such as the size of the beach or its depth, we often find that sea conditions may be not so nice as we were expecting in the first place.

It all depends of where are you kitesurfing and if you prefer a shallow flat -but sometimes too shallow- water or also a more even water surface or a more disturbing amount of chop, caused in fact for the slopy beach and the intense wind force.

August and September are the rainiest months in Thailand while in the northernmost cities, Chiang Mai and Chiang Rai, they may be under cloudy skies but receive much less rain than southern destinations.

The rain begins in April in the Andaman Sea, on the islands of Phuket and Koh Lanta, while on the east side of the country, on the islands of Koh Tao and Koh Samui this happens at least a month later. In that two islands the best months forkitesurfing  are between end of November and until end of February.