In the beach of Bai Sau, today, we enjoyed one more day of great kitesurfing conditions.
Here is a brief report of the kitesurfing scene in Vung Tau.

A broad and long beach,  24 knots of wind, great water conditions for kitesurfing and a lot of space, free from other kiters or sun bathers in that part of the beach. This was the expected kite scene

I know that for some of you, this will not seem too attractive.   Maybe you prefer a busier beach, action, waters which you can share with your kite pals, where other kitesurfers will ride also

Though, sometimes, they might cross your path, so maybe you can say hello when they cross … but this was not our idea, David and I prefer all the beach to ourselves

Today the wind was from North East and at noon we had already 18 happy knots which by 2 pm had turned into 24 consistent knots.

We rode our motorbikes through the beach in middle low tide, all the way from Vung Tau, until the left end of Bai Sau beach, which, I must admit, it is a relaxing activity.   Of course you have to be careful with some pools that the receding tide left  but it is ok, no much problem about it. 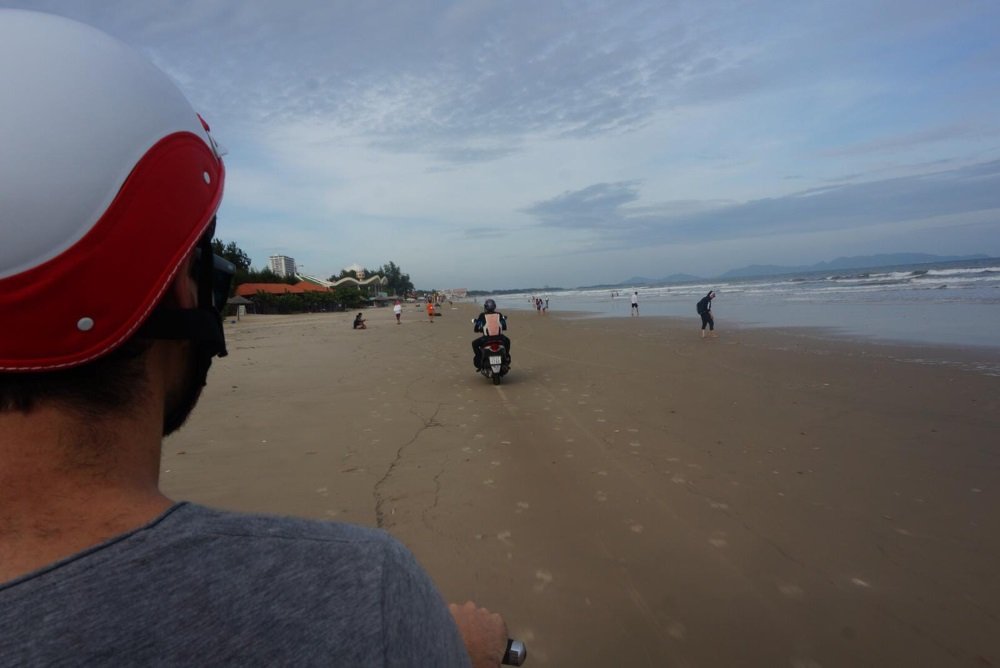 Once we arrive at the end on our kitesurfing trip we prefered to stop one kilometer before the beach end. On this part of the beach there are nice water conditions with small waves once on the outside sand bank, which is of an extension of more than one kilometer

This is not an average kite scene, not the kite scene that you see at any kitespot anywhere.

This is our “special” kite scene, this is “our kitesurfing scene“, the one we like, the one we want, the one which made us travel until here, to kitesurf without stress, without hassle, without crowds of kiters fighting for space, just you and a friend -this time- sometimes, just few more friends. 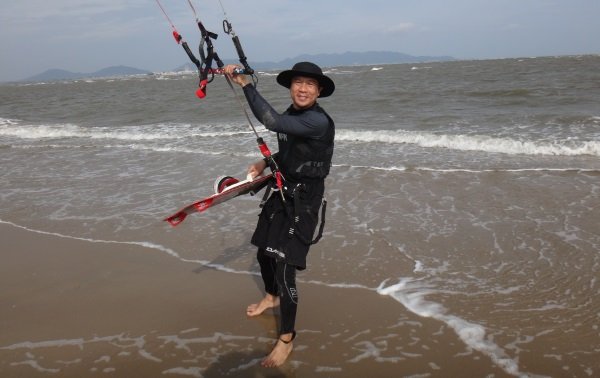 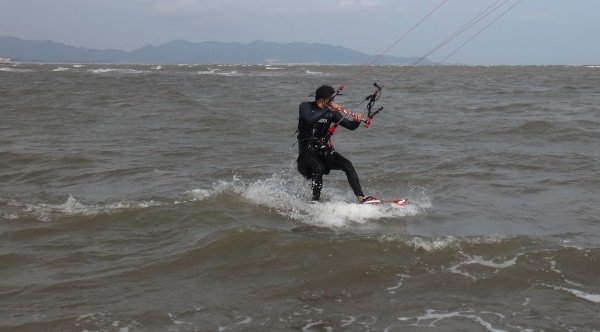 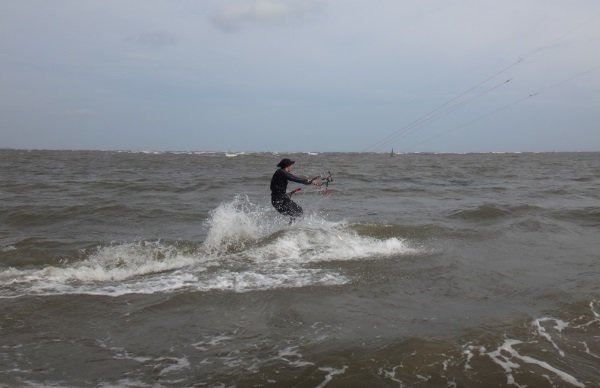 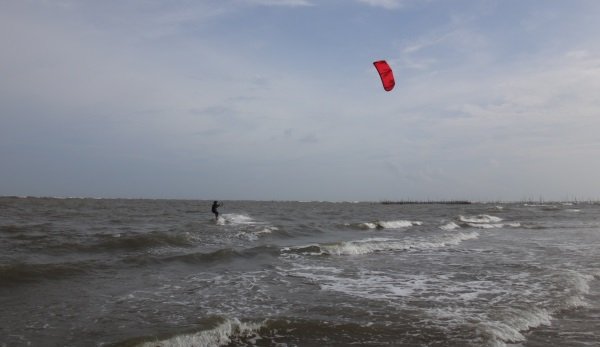 Then, on our private kite scene, first I helped David in launching his 6 mts tube kite. Watch him departing well powered and after making sure that he was ok and enjoying the kite scene I proceed to prepare my kite.

Perhaps I should call my kite: Special edition.  Flysurfer has named it that way, though with this kite model happened something really special.

It was released in both versions, standard and Deluxe and in only two sizes, 8 and 10 mts. The special part of this kite?  Flysurfer passed from 2 pulleys per side to only one pulley per side.

I heard that they also tried to do the same thing with the bigger sizes, but, after some long months of tests, actually almost one year, it was not possible  to reduce the pulleys from 4 to just 2 because it seemed, the bigger kites didn’t performed well.

This was the door that led Flysurfer to decide to launch the Lotus model, first, in the large sizes and then in the 8 and 10 meters as well. Therefore, I believe that I am authorized to confirm that, in some way, my kite is a “special edition” or, I consider it that way.

Well, so I choose for the day my Flysurfer Speed 4 deluxe of 8 mts and my splitboard Flyboard of 134×41

I prepared the kite putting some weight on its upwind tip, unwind the lines, make sure all was ok until the kite bar and pre inflate the kite with the incoming wind, walk until the bar again and launch it at 100 degrees angle without any problem. 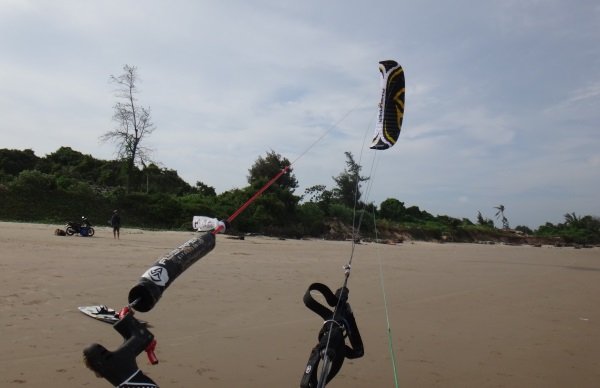 There are no more photos to upload on this blog entry but the ones we took from each other and this was at the beginning of our kitesurfing session or at the end of it.

Just a couple of photos and this video on our wave kite spot, because what we really wanted was to enjoy our kite session and have fun, after all, the photos were not so important. 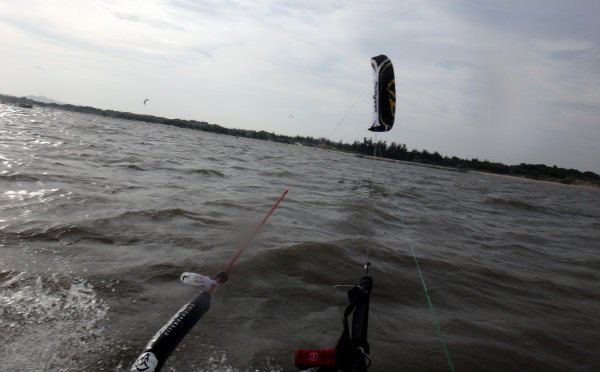 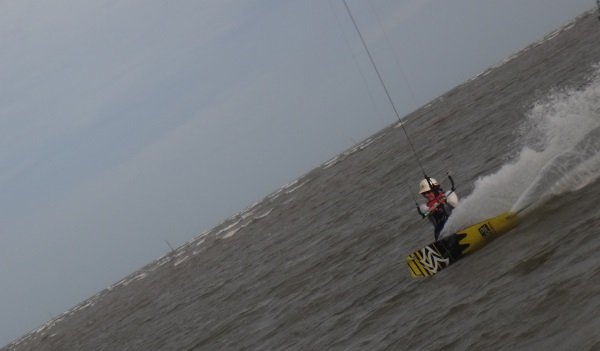 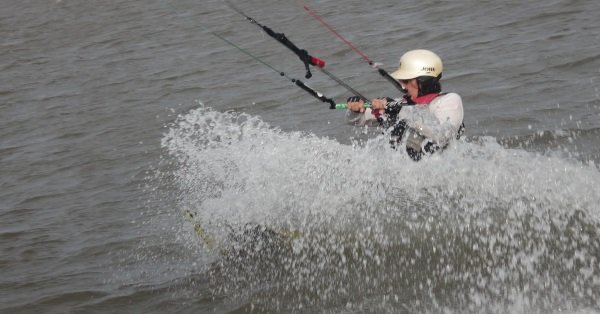 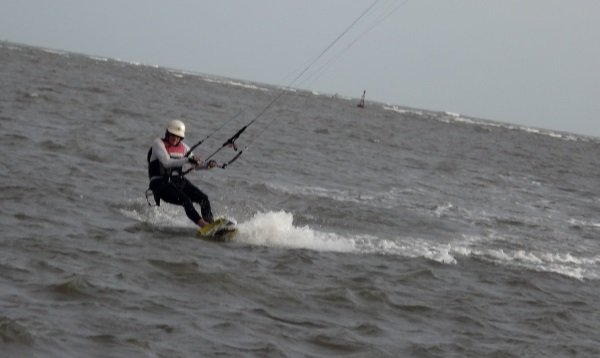