Ho Chi Minh, the big city of southern Vietnam, just 125 kilometers from the sea.
Is it possible to take kitesurfing lessons near Ho Chi Minh?

Kitesurfing for those who live in Ho Chi Minh city

It was needed an explanatory and even necessary entry to the blog of kitesurfing lessons vietnam webpage about it.
Weekend trip to the beach near HCM city?

After a busy week, lot’s of work and duties but filnally Friday is here. Time to think in leisure and sea breeze
Living away from the sea is always an inconvenience when you want to take advantage of your free time to practice or learn kitesurfing

But sometimes,there is always a possibility that perhaps might be a lake in the vicinity, but even if there’s is one, that lake must have some requirements that should allow kitesurfing navigation

When kitesurfing is a sport in which wind is going to be the engine that propels us, it is evident that the lake should be surrounded by flat ground and no obstacles such as trees or hills that could be interposed in the wind path 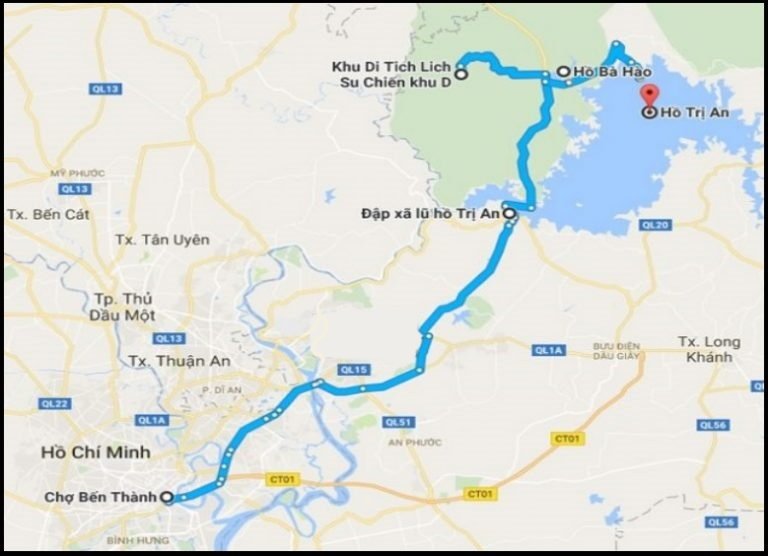 It happens to be that this is the case, there’s a lake where  perhaps it might be, at least theoretically a possibility of kitesurfing near the city of Ho Chi Minh?

No, unfortunately there’s not a chance because that lake in the area it is the Tri An reservoir, an artificial lake 65 kilometers from the city -which is not so much distance after all,  and which was built with the help of the former Soviet Union with the aim of creating a hydroelectric power station.

The lake has a large area, 320 square kilometers, which is a big enough place to try kitesurfing but  the biggest drawback is that due to the tropical climate of Vietnam and being the country’s meteorology dependent on the two monsoon seasons, in that lake very rarely there are winds that could be considered suitable for a kitesurfing navigation.

However, not being the lake very windy, it should always be a day, from time to time, in which it may blow some good wind  … then … why not?
Sure! why not try to go kitesurfing there? …

First, because you would have to need plenty of free time to be on the lookout for that glorious day when the wind will blow over the lake, but also for another reason than this one it is a reason of weight -and here starts the wanna-be-funny-part-of this-blog-entry-

Which one? What I’m talking about? … Well … what you would expect from a lake or body of water in a region in which if you do not know for sure if there are or not, the truth is that in the past, there were animals who may live on the lake waters.

What? … nonsense, right?      Which are the chances that one of this creatures could be sharing space in the waters of the lake in which hundreds of people devote themselves to the noble entertainment of fishing, submerged to their waist?  How could that be?

Friday, 10/24/2014. That was the date. And, from what was deduced from the published, it is evident that nobody was not able  to find the crock, so it might still be around … as long as the beast has not been able to mate, as if that was the case,  we really may have there an even bigger problem.

This animals can live many years, as many as 80 in some cases, it is possible that he -or them- continue in the area?

Summarizing. What’s the need  to go kitesurfing there,  get into the water where it may be a crocodile, living happily and quietly life.  Why bother the animal? Why make him believe that you have come there just to feed him … with your own body?  Are you really so desperate to kitesurf?

Better ignore the lake alone and look for wind elsewhere. And here is where we get serious again about the main goal of that blog entry: Kitesurfing or learning to kitesurf if that is your case

For example, at the sea.  Yes, we already know that the sea it’s a bit far from Ho Chi Minh city, 125 kilometers at least, that is, twice the distance from the city to the lake, but with so many bus companies providing the service plus a Fast Ferry boat, distance it’s not a problem, definitely, you should consider the possibility to come to Vung tau  and learn kitesurfing 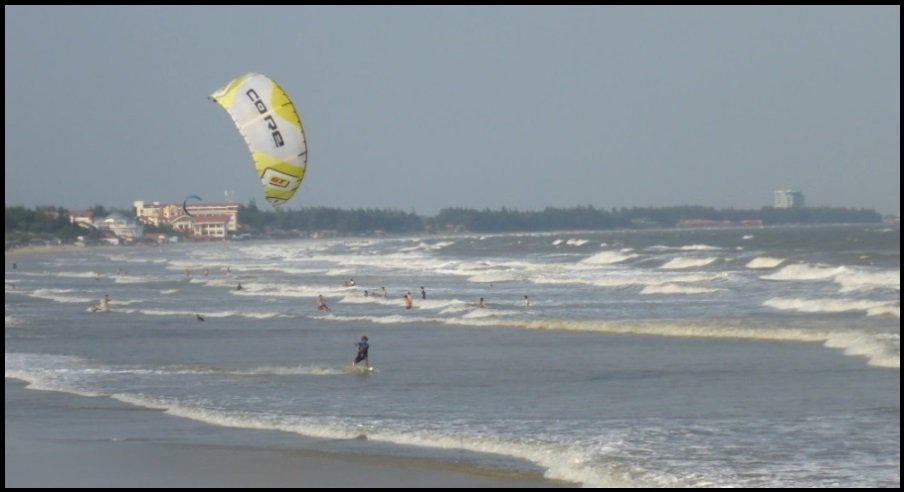 Learn kitesurfing in the great Vung Tau Back beach – Vietnam

Our kitesurf school in Vung Tau

VUNG TAU. There is no better kite spot to learn kitesurfing all over Vietnam. Is this just an opinion?   Let’s see this more carefully.

What are the ingredients of the “perfect cocktail of success” to learn the sport of kitesurfing:

1.- A light breeze. Yes. Although it may sound strange, you do not need a lot of wind to learn kitesurfing.

During the first two sessions of your kite lessons, you need to understand how a kite works and how to pass, thanks to your precise steering on the kite bar, your commands to the kite.

A light breeze at this stage or your learning it is crucial.

A “not so light breeze” will definitely complicate things.  You will be more prone to make handling mistakes, and your kite will become too fast and much less forgiving to  your inevitable beginner mistakes.

2.- A free zone of other users of the beach.

You really do not want to crash your kite in someone’s head.
A kite can go on instants from an innocent toy to a very dangerous object that can develop a lot of power.

You must always choose a place where you will not put at risk any person while you learn and practice kitesurfing.

3.- As you will start practicing in the water and try your first waterstart, you want a shallow and flat water area.

That’s what Vung Tau, at the last part of our Back beach offfers
Just a funny 12 km ride on your motorcycle at low tide along the beach or at  high tide, you can also get there by road, and there we are!

Vung Tau. That beautiful city , which surrounded by water almost everywhere, has a couple of beaches, one of them truly wonderful to learn kitesurfing and where the wind is rarely going to fail 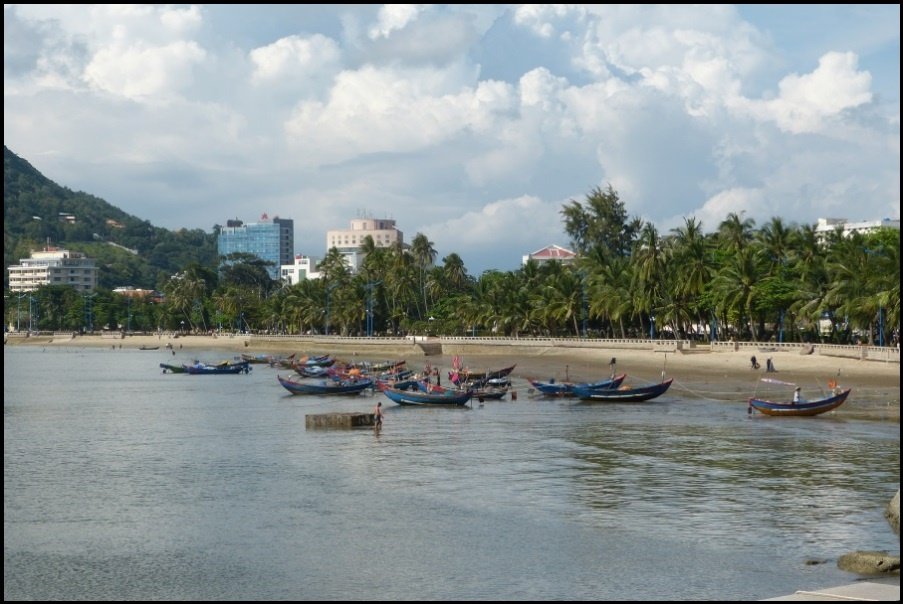 And when wind turns because the season is bringing wind from the other direction, in this case we can still make use of our fantastic kite spot due to the low tides and big shallow eater and sand banks.

In case we would have to go to Front beach, which we already know is not so pretty, fun, clean and interesting as Back beach , some Vung Tau kitesurfing locals would also opt to ride there from June to mid of September

Where else can I practice or learn kitesurfing
in other beaches near Ho Chi Minh?

And someone will think: But, in addition to Vung Tau, there are other coastal areas that could also be tested for kitesurfing. Yes?  On paper, yes, but not really, or almost better not.
We have Vinh Châu which is on the other side of the mouth of the river arm that is to the left of Vung Tau.

The farther south we move, the more we get into the Mekong delta,  in where the waters are definitely more turbid, the beaches are worse and muddy, and it could be that one may end up meeting a crocodile. Perhaps a lucky one that for some almost unthinkable reason was able to fled from one of the crocodile farms in the area.

They say in the wild, crocodiles are extinct, and it may well be true, but … what if not?

Go out at sea, fish, catch and sell – this is how that works

Here people always have a good desire to eat and they will not make an issue of improvising a crocodile barbecue and even more when I read somewhere that the meat of the animal has great resemblance in terms of taste,  with chicken meat.

Considering that, if I have read this, why not may have read it also another million or a million and a half people, all of them living in the coastal areas of the Mekong Delta?

But … and if not?  What if they have not read it because newspapers do not arrive there, or because many people, even though they have a smartphone and spend all day with it on their hands, they dedicate it almost exclusively to taking selfies  instead of reading interesting things, as, to know what is in the water in the area where you thought you may go to bathe?

At the end of the peninsula that is the entire Mekong Delta, it is located Bac Lieu, almost 300 km from Saigon, evidently, quite far away from the city, then, why to go until there to kitesurf when it is broadly known that in all that part of the coast are not expected, idyllic beaches neither turquoise waters.

Anyway. Again, we are ending on the same point. Why take risks? Why complicate your life by going kitesurfing to a beach with brownish waters and muddy sands?

Beware where you choose to kitesurf!

So that’s it … Everyone heading towards Vung tau!  where has never been spotted a crocodile … and if it was, at some point, long ago in the very far past, a “salt water  type of crocodile” lost his way and ended in the area, the hordes of fishermen of Vung Tau and especially the ones of Long Hai, they would have already ended their crocodile barbecue celebration long, long time ago.

We wait for you in Vung tau . Those who already are kitesurfing and all those who intelligently, want to make the best of their free time, and learn it, and,  oh, yes …  and can afford it, of course.

A LITTLE MORE ABOUT CROCODILES
IN SOUTHEAST ASIA

Crocodile farm at the Mekong Delta
One among the many farms dedicated to crocodile farming in Vietnam
-to make bags of his skin, sadly, for the crocodile especially-

Areas in which crocodiles live in Asia 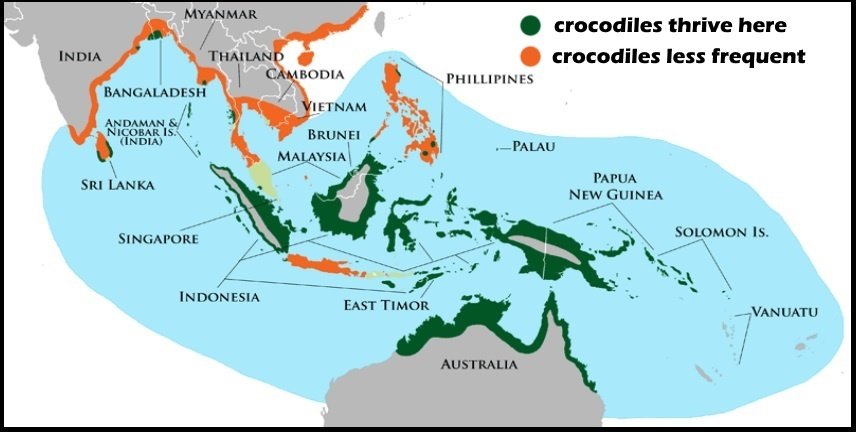 Areas where crocodiles are found in Southeast Asia

And in the following links, varied information on the subject:

Saltwater crocodiles were present in the far past in some waterways of southern Vietnam, particularly within the Mekong delta region, but today it seems likely that the species has been eliminated from the country.

The species were historically present throughout the Mekong delta, as well as within the provinces of Ca Mau and Kien Giang to the south. In addition, saltwater crocodiles were also known to exist within the Con Dao archipelago to the southeast of the continent and on Phu Quoc Island, near the border with Cambodia.

It is unknown whether resident populations of all species were present in Vietnam north of the Mekong Delta region. The mangrove region, formerly known as Rung Sat Swamp, near the city of Ho Chi Minh was decimated largely by herbicides during the Vietnam War, although in the late 1960’s a large crocodile was sighted throughout the coast in a deforested region.

A survey of the U Minh Thuong nature reserve in the province of Ca Mau in the early 2000’s showed no sign of any crocodile presence in many years.

In fact, most of the locals either completely ignored the presence of crocodiles or said they had not been spotted for a long time, suggesting that the species had been absent from the region since long long ago. 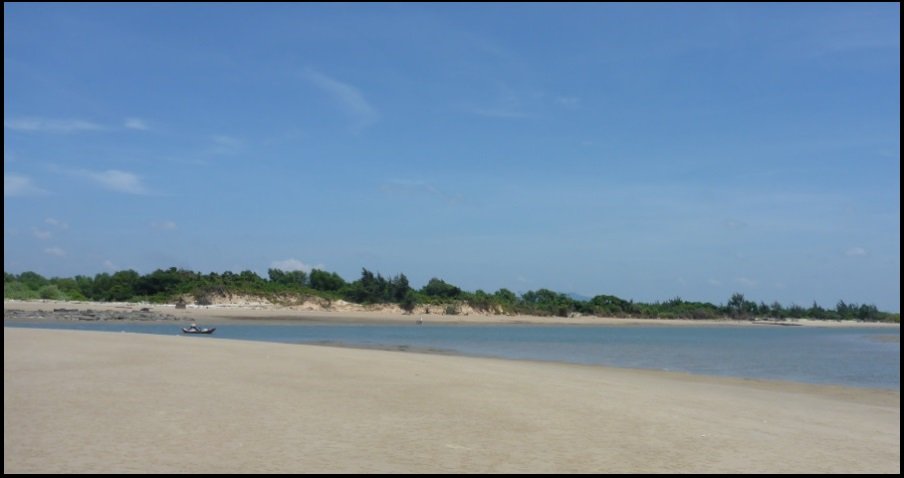 Do you want to learn kitesurfing in Vung Tau?
Book your course here at the best price