The death loop can have dire consequences and occurs when, generally, a tube kite type, involuntarily, gets into a loop 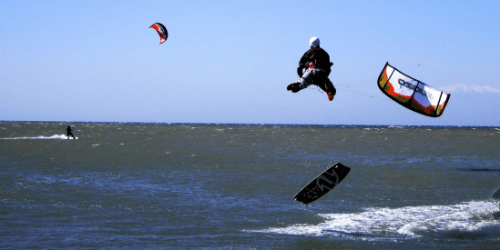 The reason for this? … two different scenarios but with the same result

1.- One of the steering lines, being without tension, is rolled on one end of the bar, which causes the kite to get into a brutal loop  and with few traces to stop 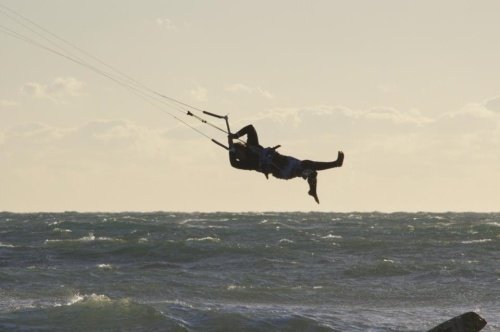 2.- Or, in the kite, one of the bridles of the steering lines, once the kite has fallen from the sky and in the process of relaunching it, due to a mistake, it will roll around one tip of the kite, resulting in similar consequences of which occur on the bar.

Possible solutions if we get into a death loop?

In fact, I am afraid I have to to admit, there’s little or almost nothing to do if your kite gets into a death loop -perhaps that’s why the name-

Basically what can we expect?

A.- Gain control of the kite again
B.- Pull our quick release
C.- Hope that our kite, on it’s frantic loop situation, will crash so hard against something that will destroy itself

The first of these 3 is almost unattainable. Whether you’re fast  -and lucky enough- to grab your line cutter, -a sharp hook connected to your harness spreader bar- and start cutting one, or all of the lines in front of you.
Or if the problem is in the bar, you can pull the steering line and untangle it from the bar, something very unlikely to be achieved, especially if in medium or strong winds.

The second, if possible, should be the salvation, but we should consider that most likely we will be being dragged and out of control, in which case, to have the serenity to find and pull the quick release it will be a real “hero thing” to do

But to make things worse, it is also possible that we will get tangled on the spreader bar hook of our harness, also by a steering line, which in that case, would make the possibility to pull the quick release absolutely unattainable.

The third of the previous scenarios, in fact, was what saved my life once.

When I was kitesurfing with a 9-meter tube kite at 32 knots. The kite cought a shadow of wind, collapsed, fell into the water, the lines loosed slightly, one of them rolled on one of the tips of the bar, everything in just a matter of seconds, and miraculously, a gust relaunched the kite and powered it

As a result, I was being dragged very fast and uncontrollably towards the beach, head first, in supine position and rebouncing ovet the water surface, which definitely made any possibility of pulling anything: quick release, steering line or line cutter knife, a real utopia.

Then, when the kite reached the beach, it was when, to my luck, it destroyed itself on its fan mode. It crashed repeatedly, once, twice, three times, and more, against the sand at the same time that, once again, to my best luck, being an old kite, the fabric could not stand the punishment and broke into pieces.

Some opinions on the thopic under this line:

Similar incident took place on a popular kitesurfing spot in Catalonia, and the kite of one of the guys, after being tangled with other kite, got one of the steering lines rolled around the kite tip and, on its kiteloop path, took along a jumble of fishing rods on account of those who were fishing on the shore.

Clearly, there’s little that can be done in such cases.

Here is the link to the video:
https://www.youtube.com/watch?v=ApRxAUVEH6U&feature=youtu.be