With this entry in our kite blog: other winter kitesurfing trips, we want to give anyone who is reading in our blog, ideas in order to access to other destinations where you can go kitesurfing

This entry, specifically, differs somehow from what it’s expected. Anyone who thinks about going to Dominican Republic to practice kitesurfing will immediately be attracted to the magic word: Cabarete

But we must not forget that the island is quite large and that there are many other places to go kitesurfing.

KITE SPOTS WHICH I HAVE TO VISIT AGAIN
The lake of Oviedo, also known as Laguna de Oviedo, is a salt water lake in the Jaragua National Park, Pedernales province, Dominican Republic 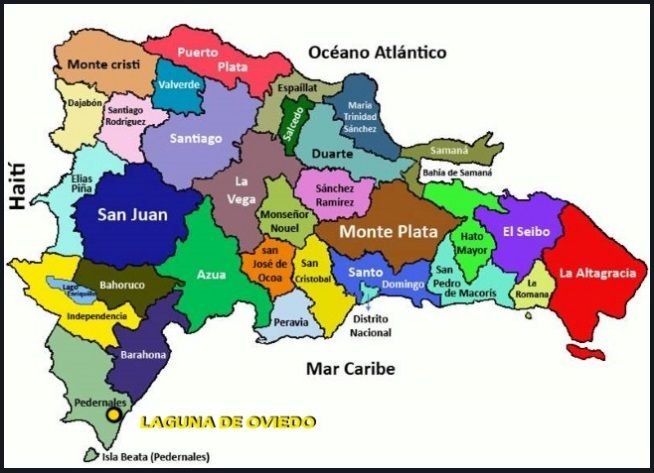 The lagoon has a surface of 25 km2, which makes it the second largest lake in the Dominican Republic after Lake Enriquillo.

Although it receives fresh water from the Bahoruco mountain range, the lagoon is hypersaline, since seawater seeps into it, and salinity levels demonstrate seasonal changes due to precipitation, evaporation, and the amount of contribution of fresh water.

One of the most outstanding aspects of this lake is the greenish aspect of its waters, caused by limestone sediments that drag the flow of groundwater into the lake

Also its flora and fauna are perhaps its most interesting feature, flamingos, rhinoceros iguana, mangroves, several endemic species of birds and several keys or small islands

Actually, nothing particular if it wasn’t for … the tremendous wind that the lagoon receives practically throughout the year

On my Dominican journey, which lasted five years starting in 1988 and until winter of 1992, and moved by my inquisitive and hiker nature, I began to explore the entire coastline of La Hispaniola, once the bay of Cabarete became small, despite to its phenomenal wind conditions, it was time to take a backpack and explore the coast

Dominican Republic back in 1989

At that time, kitesurfing did not exist yet but windsurfing, and Cabarete was one of the windsurf spots recognized worldwide for later thanks to kitesurfing becoming the spot par excellence in the country

And by 1988, to be precise, it brought together up to 12 windsurfing schools, with professionals and world-class sailors as their owners

In those days of my travels up and down and everywhere, among other objectives, I set a goal to see where there were the best wind and wave  conditions on the island, and although I could talk a lot about it, so as not bored anyone, this time I will talk only about the lagoon of Oviedo

What led me through that area of the country, practically unknown except to the locals, was to know those not yet seen, but frequently praised nationwide beaches of the southwest 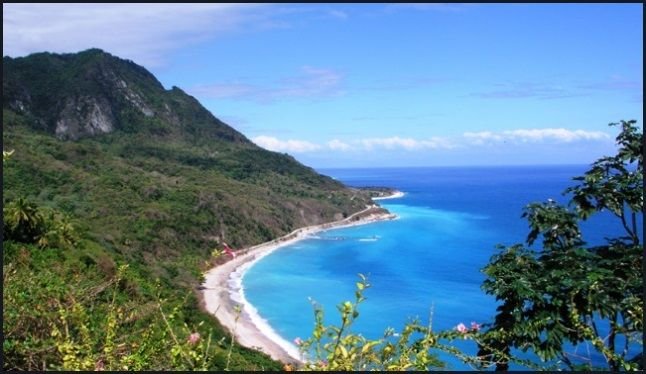 But the issue was that, in addition to being far from everything, there was only one road in a pitiful condition, something on the other hand, most common in the Dominican Republic, so, on my first try, and seeing that once you left Barahona city behind in a southwesterly direction, one was forced to enjoy the almost non-existent asphalt or cement firm that dictator Leonidas Trujillo had put on that road 30 years ago, so I had to gave up on my attempt

road in poor condition after past Barahona city back in 1989

I resumed the challenge two years later, when I casually read in a newspaper that the new road was going to be inaugurated shortly. But the article failed in something, it did not conclude, specifying, that the road was not yet to reach Pedernales, but to Enriquillo, so that the asphalting of the road was finished well before where I had myself promised to arrive, to Cabo Rojo and the Bay of Eagles and what I had read, was one of the most spectacular beaches in the country

To conclude, although the road did not help much, I went on in that dusty hell and mined by treacherous boulders everywhere, in a dilapidated bus and crowded to the brim and more, of people carrying everything imaginable

From lumps almost as big as themselves, to fighting cocks lovingly installed in the lap of their owners, to bunches of guineo – green banana – and a hundred other things of all kinds that one can imagine

And, when I arrived at the village giving name to the small town, the words “Pueblo de Oviedo” were almost a bad joke, as it were just few scattered houses in what seemed a ghost town of the far far west. Needless to say, that what surprised me the most was the wind. In fact, a few kilometers before arriving to Oviedo, I found the access to the lagoon that took the name from the village

A formidable windstorm, which should not go below 35 or 40 knots, since walking through the area, on account of the brutal gusts of wind, became almost impossible

But I was decided at least, do the honors to the place. Once I got to the lagoon, I embarked on a “yolita”, a small boat typical from the area and it is in what those who live there, use as a means of getting their principal sustenance, tilapia, typical fish of the Dominican lakes and lagoons.

It was a worthwhile the excursion, although we, me and the fisherman which I convinced to take me for a visite started walking with the white mud up to half a calf for almost 300 meters pushing the boat until we found enough depth to be able to start rowing away

muddy waters on Oviedo lagoon on its first 300 mts

The wind was very strong and since I did not carry my windsurfing equipment with me, I had to settle for enjoying the vision of the great flocks of flamingos that live in the lagoon but not without promising myself to return one day. Unfortunately, 33 years have passed and I have not yet had the chance, in part, because I quitted living in Dominican Republic for quite a long time

But, yes, let’s notice that the cause of this little report are the two photos that I discovered by chance a few days ago, in which you can see a couple of kitesurfers sailing with their kites at Oviedo lagoon.
This fact brought back to my mind my old excursion and therefore, they are enough reason to remember my promise unfulfilled, as well as, to be glad to be able to testify that, surely moved for the same reason it moved me then, many years after my excursion, a representation of Dominican kiters, almost certainly residents of Cabarete, had the same idea than myself, back in those days

But I can not keep to myself a little more detail, apart from being something not related to kitesurfing or sailing, but which I have not forgotten despite the passing of the years.

On the way back, and since the bus simply “did not pass”, and since I had involuntarily mimicked everything that was around because of the white dust flying at 35 or 40 knots all over me, I decided to try to stop some of the very rare vehicles that were running around, that is, one every half hour or so, if there was luck.

After a while, someone stopped, a huge truck, called “patanas” 16 meters long. Inside were two guys, one as a companion, who should be about 16 years old, and the driver, a Creole on his forty, skinny and weird and dodgy appearance, but with an unquestionable look of a good rum drinker.

Dressed in a shirt without buttons of indefinite color, with and unshaven face for at least a month and whose main characteristics – what I could see at first glance – were, driving while grabbing the huge steering wheel of the truck with his right hand, while with his left hand he practiced constant libations of a bottle of Ron Brugal.

While the second characteristic, no less surprising but much more ominous still, was that in the belt that attached the pants to the body, he carried what I, in my absolute ignorance about the world of weapons, could not but describe as the closest thing to a Colt 45 of those who wore american cowboys in the movies of the Far West, enormous tool, at least a span and a half long

“things” that unfortunately, still happens around the remote areas of Dominican Rep

And the even more curious part is that from time to time, he was stopping, logically, right in the middle of the “road” and went among the bushes, generally not far of the places from where some locals may be dwelling around, quite scattered and mostly, almost hidden from the “inexistent road”

At first, and moved by my natural innocence I thought: he’s on his way to “change the water to the canary”  -that is, pissing-

But already on the fifth or sixth stop and when he left me alone again with the co-pilot, I understood that this could not be about natural urination

Or else, the Creole suffered from a very serious urinary inconsistency- , one of two,  trips to the  road side were understandable but so many stops and trips into the bushes-  … mmm … something else was taking place there which evidently, escaped from my understanding.

So I couldn’t resist it anymore and  already starting to expect some crazy behaviour from the dodgy semi drunk driver, I had to try to satisfy my necessary and understandable curiosity 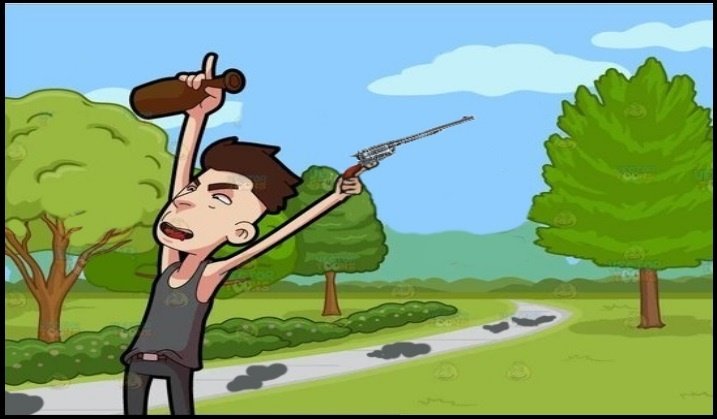 Hey!  … where is the man going  during all this stops? I asked.  Then … the kid told me with a gesture of conformity but with traces of not really approving what he was saying: I think he’s visiting “them” to see if they want anything.

I mean, that the guy was getting off the truck and stopped at every cabin or hut among the very few that were in the area, and he was going to offer his sexual services to the females that might be there … and hence the Colt, in case the husband showed up or was around

Unnecessary to say that I got off the truck at once, and that, I still remember the eyes of the Creole when, after a few minutes, driving the tremendous machine, in the middle of a dust cloud, as he passed me, he gave me a sharp disapproving look, perhaps because of what that he supposed, not without reason, a lack of understanding on my part, towards his attitude.

If you ever decide to visit the beautiful and magic country of Dominican Republic, take the chance and visit the Southwest of the island. Whether  to practice kitesurfing or not, you won’t regret it!